Skip to content
Échappées Belles from the Land of Smiles

Échappées Belles from the Land of Smiles

The National Tourist Office of Thailand wanted to unveil to the general public all the riches of the country of smiles beyond the tourist sites. Thailand being perceived as a mass tourism destination, the problem was to discover hidden treasures by promoting local communities, traditions, breathtaking nature as well as the other highlight of Thailand, gastronomy, which offers a colorful, sophisticated and rich cuisine.

Article Onze Tourism has chosen to focus on a television program broadcast in prime time, the first discovery magazine dedicated to travel and featuring values such as tolerance and respect for other cultures. This 90-minute format, dedicated to a destination, highlights all the facets of Thailand by giving voice to local characters and highlighting the particular emphasis on gastronomy with a woman, a young starred chef Bee Satongun who has a trendy restaurant in Bangkok.

Article Onze Tourism has negotiated upstream a visibility beyond the broadcast of the report in order to optimize the audience:

The star journalist, Tiga, discovers local crafts thanks to the advice of a Thai woman working in a handicraft workshop. 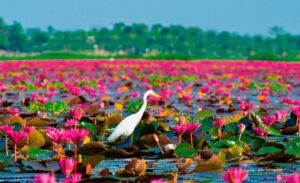 Viewers were able to discover the magnificent spectacle of Lake Tale Noi, which is located in the province of Phatthalung and offers the particularity of having a blanket of pink lotus flowers that bloom almost all year round and shelters a wide variety of water birds.

Beyond the broadcast of the show, Article Onze Tourism obtained a good visibility:

videos on the theme of nature, gastronomy, culture

And the broadcast of the show as part of a public relations evening “Fan Club Thailand” in the presence of the presenter Tiga.

The project as seen by the team

We are very proud of this beautiful documentary, which has generated a real enthusiasm for the destination. The audience exceeded all our expectations and the lively and passionate tv host Tiga played the game as part of Public Relations operations. This 90-minute program highlighted all the splendours of the destination and allowed us to meet very engaging local characters who reflect the Thai welcome.”