Skip to content
Sandrine Ledru, elected co-president of the PATA 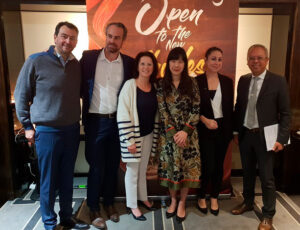 The French Chapter of the Pacific Asia Travel Association (PATA) held its Annual General Meeting yesterday and elected for the first time a joint presidency with Sandrine Ledru and Guillaume Linton.

Created in 2014 at the request of the international association based in Bangkok and the only body officially recognized in France by the headquarters of the Pacific Asia Travel Association (PATA), to constitute the French Chapter of PATA, the association held its annual general meeting. This general assembly was held following its monthly event “Before” which welcomed Thailand as a destination in the spotlight.

The Executive Committee, which was keen to respect full parity, is now made up of:

At the General Assembly, the ACCOR group was unanimously voted to be appointed as an honorary member because of its unfailing commitment to the association.

32 members have already renewed their trust (airlines, hotel groups, tour operators, receptive, representative agencies, cruise lines, institutions…). The association’s ambition is to grow and has set itself the goal of reaching 50 members by the end of the year.

Over the past two years, PATA has undertaken numerous actions to promote destinations in the Middle East, Asia and the Pacific in order to further develop their visibility among tourism professionals, the media and institutional organisations on the French market.
The association also maintains close links with the main associations and trade unions in the sector, in particular SETO, EDV and Women in Tourism.

The association has been very successful since the creation in October 2018 of its “Before” events. As part of these breakfasts, the news of one of the association’s members is highlighted. To date, PATA has organized the Before events on Indonesia, Australia, Japan, Sri Lanka and Thailand. These events are also an opportunity, thanks to the partners Forward Keys and TCI Research, to present the latest figures.

Last January, PATA welcomed Michael Bencke, founder of Belly Button, for a presentation on the Millenials.

The PATA Executive Committee announced “the creation of new actions in the second half of 2019, including a major event that will promote the ever-increasing momentum of the Asia-Pacific region”.

The association’s website, www.pata-france.org, presents the agenda, news and events of all its members in the Asia-Pacific region on the French market.